Redrawing the global map of crop distribution on existing farmland could help meet growing demand for food and biofuels in coming decades, while significantly reducing water stress in agricultural areas, according to a new study. Published today in Nature Geoscience, the study is the first to attempt to address both food production needs and resource sustainability simultaneously and at a global scale.

The results show that “there are a lot of places where there are inefficiencies in water use and nutrient production,” says lead author Kyle Davis, a postdoctoral researcher with Columbia University‘s Earth Institute. Those inefficiencies could be fixed, he says, by swapping in crops that have greater nutritional quality and lower environmental impact. END_OF_DOCUMENT_TOKEN_TO_BE_REPLACED Research proves the existence of dense populations of people up to 30,000 years ago END_OF_DOCUMENT_TOKEN_TO_BE_REPLACED 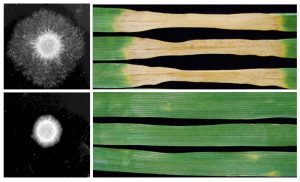 Near identical genes are also present in the fungi that cause vegetables to rot, trees to die and people to scratch, itch or struggle to breathe. END_OF_DOCUMENT_TOKEN_TO_BE_REPLACED