Scientists have found diamondback moth (DBM) caterpillars surviving in UK Brassica crops this winter and are recommending growers check their own crops for the pest now.

AHDB’s Dawn Teverson, and Rosemary Collier from Warwick Crop Centre have been out in the field hunting for the caterpillars and found the pest on the underside of leaves in un-netted swede crops, located in the south west of England.

END_OF_DOCUMENT_TOKEN_TO_BE_REPLACED

Research proves the existence of dense populations of people up to 30,000 years ago END_OF_DOCUMENT_TOKEN_TO_BE_REPLACED 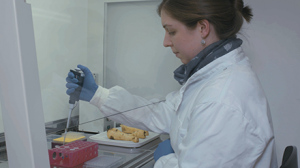 It seems we are facing a Courgette Crisis. Although it’s really just a bit of a run on green vegetables, it does remind us that actually, courgettes – and now iceberg lettuce – shouldn’t be ‘February vegetables’. This raises some important issues about what we as consumers have learned to expect when it comes to food. END_OF_DOCUMENT_TOKEN_TO_BE_REPLACED

Daniel’s project is funded by the Waitrose Agronomy Group and the University of Warwick. END_OF_DOCUMENT_TOKEN_TO_BE_REPLACED

Protecting the UK’s most valuable crops by making them more resilient is at the heart of a new five-year project, in which the University of Warwick’s School of Life Sciences will play a key role.