Up to half of plant and animal species in the world’s most naturally rich areas, such as the Amazon and the Galapagos, could face local extinction by the turn of the century due to climate change if carbon emissions continue to rise unchecked.

The Amazon, Miombo Woodlands in Southern Africa, and south-west Australia are among the most affected places in the world, according to new research. END_OF_DOCUMENT_TOKEN_TO_BE_REPLACED

Honey bees love the invasive plant Himalayan balsam and eat it like ‘fast food’ but, like humans, they thrive better on a varied diet.

A study of honey bee bread in Lancashire and Cumbria bee hives showed that in some samples nearly 90% of the pollen came from the invasive plant Himalayan balsam.

Bee bread is made up of pollen stored in cells in the hive, and is the basic component of food for bee larvae and young bees, while older bees eat nectar in the form of honey. END_OF_DOCUMENT_TOKEN_TO_BE_REPLACED

Traffic jams are the curse of the commute, the scourge of the school run and the bane of Bank Holidays. But gridlocked motorists and students of traffic flow may soon be relieved and enlightened thanks to new research into plants.

It has emerged that plants have it sorted when it comes to going with the flow and avoiding frustrating congestion. These fascinating results come from a joint study by the John Innes Centre, Norwich, and the University of Tokyo, Japan. END_OF_DOCUMENT_TOKEN_TO_BE_REPLACED 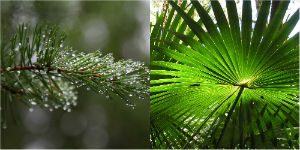 Why is a banana leaf a million times bigger than a common heather leaf? Why are leaves generally much larger in tropical jungles than in temperate forests and deserts? The textbooks say it’s a balance between water availability and overheating.

But it’s not that simple.

Research published today as a cover story in the journal Science, led by Associate Professor Ian Wright from Macquarie University in Australia, reveals that in much of the world the key limiting factor for leaf size is night temperature and the risk of frost damage to leaves. END_OF_DOCUMENT_TOKEN_TO_BE_REPLACED

There are about 400,000 species of plants in the world. Humans use approximately 10–15% of them to cover our basic needs, such as food, medicine and shelter, as well as other needs, such as recreation, art, and craft. But why and how have humans selected only a small fraction of all plants to utilize? A new study published in today’s Nature Plants sheds new light on these questions by investigating how people use palms in South America. The overall conclusion is that people are very selective when it comes to plants used to cover basic needs, but less so when it comes to using plants for needs with no physiological underpinnings. END_OF_DOCUMENT_TOKEN_TO_BE_REPLACED

Waitrose has become the first retailer to successfully apply to lead the delivery of a major investment in doctoral training by the Biotechnology and Biological Sciences Research Council (BBSRC). The money will be invested in 15 separate PhD projects focusing on food security and sustainability.