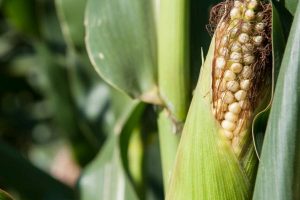 Three years ago, biotechnologists demonstrated in field trials that they could increase the productivity of maize by introducing a rice gene into the plant that regulated the accumulation of sucrose in kernels and led to more kernels per maize plant.

They knew that the rice gene affected the performance of a natural chemical in maize, trehalose 6-phosphate (T6P), which influences the distribution of sucrose in the plant. But they were keen to discover more intimate details of the relationships governing the increased productivity.

“Now we know far more about how this yield effect has been achieved,” says Matthew Paul, who led the Anglo-American team from Rothamsted Research and Syngenta, a biotechnology company that also funded the work. The team’s findings are published today in Plant Physiology.

Plant Biochemist, Matthew Paul, on the mechanisms behind T6P targeting for yield increase in maize. This new understanding provides a strategy to improve yields in a range of crops. Read more: https://t.co/pZp41MYhlM pic.twitter.com/kltrsv3QnJ

The transgenic maize depressed levels of T6P in the phloem, a major component of the plant’s transportation network, allowing more sucrose to move to developing kernels and, serendipitously, increasing rates of photosynthesis, thereby producing even more sucrose for more kernels. 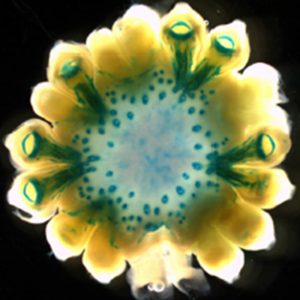 Blue dye, in this cross-section of a maize cob, highlights the rice gene that controls T6P in the kernels’ phloem

The team also chose to target the phloem within the plant’s reproductive structures. “These structures are particularly sensitive to drought – female kernels will abort,” says Paul, a plant biochemist at Rothamsted. “Keeping sucrose flowing within the structures prevents this abortion.”

He adds: “This is a first-in-its-kind study that shows the technology operating effectively both in the field and in the laboratory. We also think that this could be transferred to other cereals, such as wheat and rice.”

The paper describing the earlier field trials was published in 2015 in Nature Biotechnology.