Starts in the beautiful region of Murcia, Spain. Here I visited celery and lettuce farms in Los Alcazares and Aguilas where I set off to collect samples of the plants infected with Sclerotinia. Over a two-day period, I visited commercial and organic farms collecting the appropriate samples, from where they would be transported back to England for preparation of experimental work.

Phase I of the project would not be possible if it were not for the support and help from all the staff and farmers in Spain at G’s. In particular Pedro who was a mound of very useful information and was as enthusiastic as myself and to James and Mendez for being my chauffeurs.

There are several factors that perpetuate Sclerotinia incidence on crops, such as climate and the extensive host range of the pathogen. In addition, the disease not only presents itself at cultivation but in storage as well.

The project topic that I will be investigating is Sclerotinia sclerotiorum Which is a soilborne fungal pathogen that causes stem and crown rots in a wide range of crop plants resulting in extensive economic losses worldwide. The fungus can survive for several years in the soil as sclerotia, which when close to the soil surface germinate carpogenically to produce mushroom-like apothecia. Subsequent release of air-borne ascospores then initiate the infection process. Control of S. sclerotiorum focuses on the prevention of ascospore infection with the use of fungicides, but generally there are no attempts to eradicate sclerotia. This project aims to explore practices that reduce sclerotial survival in order to improve Sclerotinia control in celery and lettuce in Spain.

The main objectives are to:

The first trip was a success and the Spanish samples are now being cultivated to grow sclerotia. 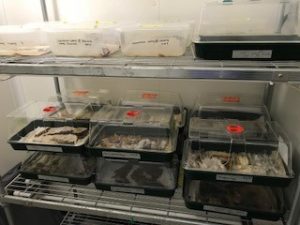 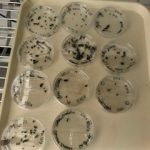 A. Celery placed on damp paper and left to develop sclerotia. The appearance of mycelium (white fluffy structures) will eventually produce the sclerotia.