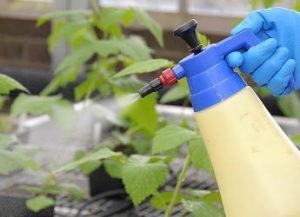 According to recent media reports the European Commission seems poised to ban some of Europe’s most widely used pesticides to protect bees and other pollinators, but is the move likely to have an impact on food production and security? Scientists at the James Hutton Institute have demonstrated that many farmers can reduce agrochemical inputs by using alternative pest control methods without reducing yield or quality.

Speaking at the seventh working group meeting of the West Palaeartic Regional Section (WPRS) of the International Organisation for Biological and Integrated Control (IOBC), held in Dundee, Hutton scientists pointed to a recent French study published in Nature Plants (£) which shows that pesticides can be reduced by more than 30 percent without incurring any yield penalties, and referenced a Scottish study in progress which points at plateauing yields despite increasing herbicide inputs.

Hutton researchers in collaboration with partner organisations are investigating the impacts of pesticide withdrawal in Scottish and English soft fruit production, and have shown that insecticides can be reduced by 30 percent using Integrated Pest Management (IPM) tools without impacts on yield or quality.

Professor Nick Birch, senior research entomologist at the James Hutton Institute’s Ecological Sciences group, said: “Most of the targeted products will be phased out over the next years, but Brexit adds uncertainty. Most farmers with high value fruit and vegetable crops are already testing new IPM solutions to reduce risks. Our overall aim is to reduce, not replace, pesticides and switch to most IPM compatible products including biopesticides.

“In some cases we can reduce applications of existing pesticides by precision monitoring or complementing with biocontrol. In other cases we’ll need to substitute old for new, for example biopesticides that are compatible with biocontrol and other IPM tools.”

Starting this summer, Hutton IPM tools are being trialled on commercial soft fruit farms in Angus and Perthshire, including biocontrol using tiny wasps to suppress greenflies (with Koppert UK Ltd) and planting flowering strips of buckwheat to attract and promote pollinators and greenfly predators (with New Zealand collaborators).

Also noteworthy is research conducted at the Institute’s Centre for Sustainable Cropping, where a 40-hectare long-term experiment is testing approaches for improving arable sustainability including reducing pesticide input to cereals, potato, legumes and oilseed rape. Following Linking Environment and Farming (LEAF) guidance, additional strategies such as the use of field margins (‘magic margins’) are being evaluated in a drive to increase biodiversity and reduce runoff.

Hutton researchers said these reductions in pesticide use are in line with policies by the European Union, the UK and Scottish governments, and will provide a basis to reduce negative impacts on bees, other pollinators and farm biodiversity in general. It is hoped these measures will help to reduce farmers’ reliance on pesticides, promote on farm biodiversity and protect bees and other pollinators.