The weather seems to have been the main topic of conversation over recent weeks. For most of us, our biggest concerns have revolved around avoiding getting sunburnt and keeping ourselves cool in the heat. However, farmers across the UK have been facing much greater problems. During my field trial work and interactions with Sandfields Farms Ltd (G’s Growers) in this first year of the project it has become quite evident how much of a headache the weather can pose to growers.

Currently the UK is experiencing one of the warmest and driest summers in years. Extreme heat can have a negative effect on the growth of some crops. This was seen earlier this summer when it was reported that lettuces could be in short supply due in part to their inability to grow successfully in temperatures exceeding 30°C. Furthermore, the prolonged dry weather is now reaching a point where growers are suffering from water shortages, with river levels dropping and reservoirs drying up, leaving some with little option but to let their crops go thirsty. This could to lead to reductions in yields and may translate into price increases for consumers.

In stark contrast to the current heatwave it was not that long ago that we were suffering weeks of very wet and cold weather. I can recall earlier this year standing in an extremely wet field discussing with a grower the troubles they’d had simply trying to find a couple of dry days to sow their crops, after seemingly weeks of rain.

Furthermore, we only have to look back to 2017 when the supply of some produce was also interrupted due to severe rain and flooding in Spain. Again, unseasonal weather events having major consequences for growers and consistent supply of produce that we now take for granted.

These extremes of weather that we’ve seen this year cannot necessarily be attributed to climate change at the moment. However, the difficulties raised by the recent weather events have made me think more about how UK crop production will look in the future if current climate models become a reality. Temperature rises, changes in precipitation patterns and increases in the occurrences of extreme weather events are all predicted for the future, and are bound to have a significant impact on food production.

Farmers have always had to contend with the uncontrollable and largely unpredictable nature of the weather. Nevertheless, the predicted shifts in our climate are likely to make this challenge even greater and will require growers to start to considering how they may adapt to overcome these changes. 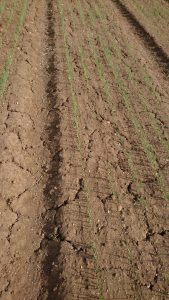 Cracks in soil developing due to persistent hot and dry conditions