I was recently asked to visit a land owner who had a rather difficult and sensitive problem to deal with.  The gentleman had been working in partnership with a business man to clean up and restock two beautiful fishing pools which were to be opened up for leisure fishing later this year.  They had worked hard for a couple of years, and felt they had cracked it. Then, disaster.  The water quality had suddenly changed. Foaming water poured from a land drain and the pH had risen to unacceptable levels for fish to survive.

On further investigation I could see an open field on higher ground above the pond.  The field was totally sodden with muddy water streaming along big ruts into drains, and straight into the pond.  The field had been planted with maize (year on year) and left uncovered over winter. Frankly, it looked a mess and I felt sad for the guys who’d been making great efforts to clean the ponds.

Soil run off is a big problem. Our top soil is eroding at a staggering rate. It gave rise to the alarming headline in the Farmers Weekly in Oct 2014 “Only 100 harvests left in UK farm soils”.  Some 4.3bt of carbon/year that was in the soil is now in the air and contributing to climate change.  The lack of top soil and an increasing amount of rainfall has exacerbated the problem of run off.  At the Paris Climate Change Conference special attention was given to soil as a primary solution to mitigate climate change. It was proposed, and is now part of the Climate Change Agreement, that there should be a target for the increase of carbon in soil at a rate of 0.4% (or 4 per 1000 initiative) per annum for 20 years.  Given that it takes some 100 years to produce a 1cm of top soil what can we do?

Cover crops present a solution that would have certainly helped with the gentleman’s problem above.  A cover crop is usually grown in between the cash crop.  There are many plants that can be used as cover crops, each bringing a whole wealth of different benefits.  Cover crops can not only stabilise soil, reduce erosion and prevent the leaching of nitrogen, they can suppress weeds, lock in nutrients, improve soil structure and add to the organic matter.

Over the next few years I’m aiming to measure the increase in carbon stored in soil with the use of cover crops together with other farm practices or treatments.    The key is in the microbiology of the soil.  Planting of plots is occurring in the next couple of weeks and the worm counting (amongst other things) will begin.

Will cover crops provide a sticking plaster solution to our soil problem or can they have a more important sustainable role as a feedstock of carbon into soil? Watch this space. 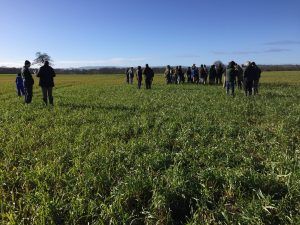