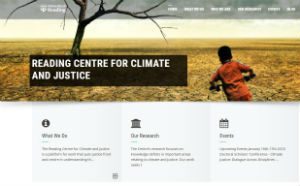 A new research centre that will support communities threatened by climate change was launched at the University of Reading by former Irish President and UN human rights high commissioner Mary Robinson.

The Reading Centre for Climate and Justice is dedicated to putting justice at the heart of understanding the problems caused by climate change, and finding solutions to protect those most vulnerable to them. It seeks to deploy expertise at the University to identify gaps in knowledge, and emerging areas, that would benefit from a justice-focused approach.

Mrs Robinson, President of Ireland from 1990–1997 and UN High Commissioner for Human Rights from 1997–2002, was keynote speaker at the launch of the centre on Thursday 18 January. She is President of the Mary Robinson Foundation – Climate Justice, and from 2014–2015 was the UN Secretary-General’s Special Envoy on Climate Change.

Professor Chuks Okereke, Associate Director of the Centre for Climate and Justice, said: “Much climate research is dedicated to finding out the causes and likely impact of a changing climate, but there is relatively little attention given to the people whose lives are being changed forever by it.

“The Centre for Climate and Justice will speak up for those most affected by the effects of climate change, many of whom live in some of the poorest parts of the world.”

Professor Catriona McKinnon, Director of the Centre of Climate and Justice, said: “The launch of the Centre reflects the University’s commitment to joined up thinking about the human impacts of climate change. It will serve as a hub for scientifically informed, policy-relevant projects that will help to enable agents of change to resist climate injustices and enhance their resilience.”

Contributing to the Centre’s work will be experts in ethics, law, politics, geography, development, philosophy, international relations, and climate science, from across the University of Reading. The Centre will also draw from world-leading experts within and outside the UK. They will equip policymakers and communities with the best resources to inform change, as well as training future researchers.

Over the next two years, the Centre will aim to advance knowledge in the following areas: