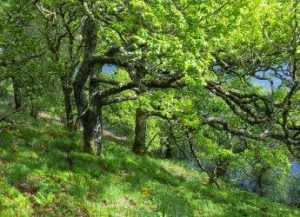 Native plants need a helping hand if they are to recover from invasive rhododendron, Scottish ecologists have discovered. A new study in the Journal of Applied Ecology reveals that – even at sites cleared of rhododendron 30 years ago – much native flora has still not returned. As a result, rhododendron eradication programmes may need to be supplemented by reseeding for the original plant community to re-establish.

Working in the Atlantic oak woodlands of Argyll, Kintyre and Lochaber on Scotland’s west coast, researchers from the James Hutton Institute, the University of Aberdeen and Scottish Natural Heritage studied plots that had never been invaded, others covered in dense rhododendron thickets, plus a time-series of sites cleared of rhododendron at different periods between 1984 and 2014.

They found that – even 30 years after rhododendron removal – the native understorey normally found in Atlantic oak woodlands had not recovered. Instead of dramatic displays of primroses, violets, wild garlic, ferns and grasses, only dense mats of mosses and liverworts had returned.

Lead author Dr Janet Maclean, from the University of Aberdeen and the James Hutton Institute, says: “Uninvaded Atlantic woodlands are often called the Celtic rainforest. With their gnarled, lichen-covered trees, rich carpets of moss and burns tumbling down rocky ravines, they look like something from Lord of the Rings.”

“Sadly, rhododendron-invaded woodlands present a different vista, vast stands of this single species replacing all the diverse native flora as far as the eye can see. The forest floor becomes a dark, barren place devoid of life apart from the dense rhododendron stems barring the way in all directions,” she says.

As well as analysing plant communities, the team also tested the soil at different sites but found that rhododendron had not affected its acidity, nutrient levels or carbon/nitrogen ratio. Instead, they think that the deep shade which the invasive species casts is responsible for its impact on native plants – even decades after rhododendron eradication.

“During the invasion, rhododendron dramatically reduces the amount of light reaching the woodland floor throughout the year, causing local extinction of native grasses and herbaceous plants. Mosses and liverworts cling on because they can tolerate the darkness.

“When rhododendron is removed, common mosses and liverworts quickly recolonise. But by the time grass and other plant seeds arrive, the thick mossy mat prevents them from germinating, so the site never recovers its previous rich flora,” Maclean explains.

The research has important implications for rhododendron eradication efforts. Rhododendron has spread throughout the UK, affecting around 827,000 hectares, and is particularly widespread across western Scotland and Snowdonia. Eradication programmes cost around £8.6 million a year and the results of this study show that – as well as removing rhododendron – land managers should also consider clearing mats of common mosses from the ground and reseeding with typical woodland grasses and flowering plants.”

“Our results strongly support continued clearance of rhododendron, because cleared sites are far richer than invaded sites. But for them to resemble uninvaded sites, removing rhododendron is not enough. This is an important discovery, because it means that many sites may need further intervention to meet their conservation goals,” she says.

Since it was first imported in 1763 to brighten up our gardens, rhododendron has become one of Britain’s most damaging invasive species. As well as its dramatic impact on native species, rhododendron interferes with forestry and prevents access to public land.